Berlin is beautiful, soulful and unlike any other city in the world. The Ndlovu Youth Choir was privileged to be in Berlin for almost a week and we are most humbled by the kindness, generosity and open heartedness of all the wonderful people we were fortunate enough to meet.

Upon arrival at the impressive Berlin Station the president of the Hugo Tempelman Stiftung, Mama Vivi Eickelberg, welcomed us. Mama Vivi, as the choristers affectionately refer to her, is an incredible woman who went to every effort to make us feel special during our time in Berlin.

We transferred to the Maritim Hotel where we stayed for the duration of our stay. Our choristers could simply not believe that they were going to stay in such a luxurious and beautiful hotel. All of them live in abject poverty and due to the scourge of HIV/AIDS some are orphans from child headed households. To stay in one of Berlins finest establishments was an indulgence so distant from reality that to most it was simply unbelievable.

We had the morning off and most decided to walk the streets of Berlin and soak up the city. Some simply decided to stay in their rooms and enjoy the luxurious hotel. In the afternoon we went to the South African embassy for the most important performance of our time in Berlin.

The aim of the event was to raise awareness for the fantastic work of the Hugo Tempelman Stiftung. We felt incredibly honoured that this prestigious event would benefit the work of the Ndlovu Care Group and in turn uplift the health, hearts and minds of thousands of South Africans. It is incredibly humbling to witness Europeans thousands of miles away from South Africa working tirelessly to make our country better. As a young South African I felt an insatiable urge to recommit myself to the future of my country after witnessing the fantastic efforts of Mama Vivi and her team. The question we all asked ourselves was – if they can do so much for South Africa why can’t I?

These thoughts greatly motivated us and the performance was a wonderful success. The responsive audience was great fun to sing to and they enthusiastically cheered us on and inspired us to show them the very best of South Africa. We wanted to thank them in the only way we could – through song.

When choristers join the Ndlovu Youth Choir they have no performance experience and building self-esteem and picking them up from their dire personal circumstances is the greatest challenge we face. Although there is an abundance of natural talent in Elandsdoorn, self-confidence and belief is rare. There are very few if any extra-mural activities at local schools and it our task to introduce a spirit of excellence beyond the classroom in a haven away from the social ills faced by many young people.

Seeing the choristers faces light up after each cheer from a foreign audience that evening reinforced my belief that the work we are doing is not only critical to the wellbeing of young people but also essential to the development of their self-esteem. The work we do is scientifically incalculable yet the warmth, radiance and spirit of excellence is evident to everyone who is fortunate enough to witness our choristers perform.

After a very special evening at the embassy we had the day off and Mama Vivi arranged a spectacular tour of Berlin. The open top bus was much fun and seeing the ruins of World War 2 and the Cold War transformed into architectural marvels was yet another lesson to take home.

For supper we were treated to lovely meal at an Italian restaurant. For most of the choristers this was the first time they had ordered from an a la carte menu. It was good fun explaining all the dishes to them and chaos ensued when the food came as most had not remembered the fancy Italian names of the dishes they had ordered. It was a great experience and was thoroughly enjoyed by all.

One of the international schools in Berlin has been named in honour of Nelson Mandela and we were privileged to perform for the scholars of the school during their two assemblies. After the performances we enjoyed lunch together and this was an invaluable opportunity for our choristers to interact with their German peers of the same age over lunch.

In the evening we went to the renowned Chameleon Theatre to watch ‘Dummy Lab’. Much like most of our Berlin experiences this was another ‘first’ for our choristers as none of them had ever been to theatre to watch a professional show. The show was absolutely astounding and the spectacular combination of music, interactive lighting, imagery, illusion and choreography all combined to produce a creative masterwork. The Ndlovu children’s eyes were on stalks throughout the performance and they could simply not believe what they were seeing.

After the performance I spoke to them about the spirit of excellence we aim to strive for at Ndlovu. I explained that they need to use their experience at the Chameleon Theatre as motivation to be better than they believe they can be and to always strive for excellence. I believe that this show had a profound affect on them all – it certainly did on me.

On our final day in Berlin we performed the national anthem at the Freedom Day celebrations at the South African embassy. Upon arriving at the embassy we noticed a heavy police presence. There was a protest across the road from the embassy against the xenophobic attacks on foreigners in the townships of Johannesburg and Durban. It was a protest I sympathised with and Hugo suggested to embassy staff that we walk across the street holding hands and sing a song to them expressing our unity for their just cause. I discussed this with the choristers and we all felt that we needed to express our solidarity through song.
Sadly this idea was deemed dangerous and the false sense of fear that engulfs many immature and insecure regimes had once again surfaced. The protesters chose the perfect day to highlight their concerns and the South African embassy could not have handled this any worse. The embassy displayed no spirit of Ubuntu and Mandela’s legacy was but a distant memory.

Naturally, our performance was a great success. We were honoured to perform with July Ndlovu who is a South African tenor based in Berlin and an incredible role model for our choristers.

Thereafter an old friend of the Ndlovu Youth Choir, René Richter, hosted us for lunch. René arranged the joint performance of the World Doctors Orchestra and the Ndlovu Youth Choir in Elandsdoorn and Johannesburg and it was good catching up with him in Berlin. We were hosted on the rooftop of his plush new offices and enjoyed a relaxing lunch overlooking the Spree river.

We were treated to dinner at a lovely Indian restaurant on the sidewalk of one Berlin’s busy streets. This was a wonderful way to end our time in Berlin and all the choristers embraced Mama Vivi with a special song thanking her for all her efforts.

Throughout our stay in Berlin the president of the Swiss Hugo Tempelman Stiftung, Verena Köller, joined us. The Swiss Tempelman Stiftung has given the choir incredible support and sponsored the recording of our CD. Verena bought us dinner one evening and assisted with translating and guiding throughout our time in Berlin. We loved spending time with her and greatly appreciate all she did for us.

Liesje Tempelman who is now officially the mother of the choir also joined us. Liesje is multi lingual and did a tremendous job ensuring that we all understood what was happening at all times. Liesje cared for our every need and nothing is ever too much trouble for her. The choristers and I have grown extremely fond of Liesje and she is now an integral member of our amazing team.

To say we were spoiled in Berlin would be a gross understatement. Our most sincere thanks go to Mama Vivi Eickelberg who ensured our stay in Berlin was memorable, educational and above all special. Vivi’s efforts and passion for Ndlovu are astounding and our time in Berlin has left a lasting impression on us all. Her kindness, love and generosity is most deeply appreciated.

The Berlin Wall fell in 1989 and Nelson Mandela was elected as president in South Africa in 1994. Within 5 years both Berlin and South Africa were divided and are now united. We need to continue to learn from each other and not take our reconciliation for granted. Organisations such as Ndlovu have ensured that there is growth not only in the cities but also in rural communities such as Elandsdoorn and Bhubezi. Because of this I believe that there is a special, clear and intrinsic link between Ndlovu and Berlin. 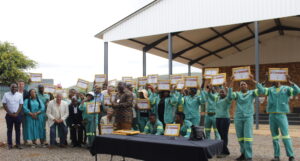 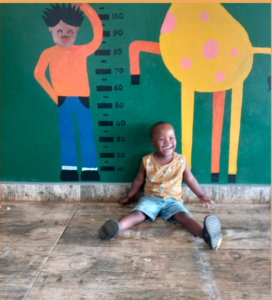 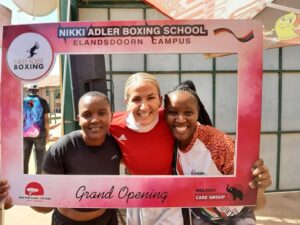